Sabib Abbas Hassan was standing on the sidelines on a typical Sunday training session at Karbala FC, and he was feeling optimistic about the future of football in his torn by war country. The athlete, slim, greying, while wearing a black and blue tracksuit, laughs and makes jokes as he remembers the events of a career that surely would have left others more serious.

Abbas was an international player between 1996 and 2001. However, his playing days were overshadowed by the dictatorship of Saddam Hussein. The football association in Iraq was one of the most successful in the Middle East and Asia, but it became a toy for Hussein’s brutal eldest son Uday.

In the World Cup finals in 1994, the players failed to reach the finals, so Uday imprisoned them and made them kick a concrete ball in the yard. Moreover, after defeats, players have been seen with shaved heads. Unfortunately, that is not all, another punishment the dictator favoured was beating on the soles of their feet.

Sabib remembers the beatings. However, he has never kicked a concrete ball. He said that they were unable to play good because of the constant pressure. Uday Hussein punished them if they lost. He added that if they lost only a single game, he would put them in jail. Moreover, if we performed badly in a match, they punished them. He shared that they beat him, and punched me in several jails in the country.

Uday’s grip on football marked the start of the country’s relationship with Fifa. Before falling into a series of civil wars FIFA enforced a ban on international matches being played in Iraq.

However, now Iraq’s Ministry of Youth and Sport decided to launch a nationwide campaign to bring these games back to the country. The posters stated: “Football is our life, let us live.” Furthermore, some of the adverts personally thank the head of FIFA, Gianni Infantino in advance for lifting the ban.

FIFA has already confirmed that it is considering the match conditions in Iraq and whether it will lift the ban. The body stated that they could confirm that they will review the safety and security situation in Iraq to determine if the current conditions allow international games to be resumed in a safe environment. However, FIFA did not comment on when the delegation will be sent to Iraq. 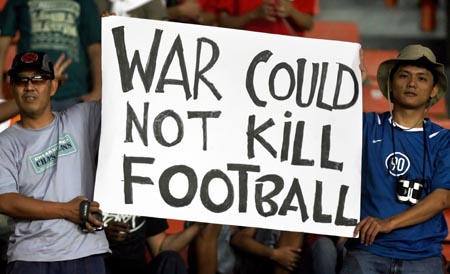 Indonesian football fans hold a poster before the match between Iraq and Saudi Arabia at Bung Karno stadium in Jakarta.

In spite of the officials’ optimism, incidents in Iraqi football’s past are a huge concern. During this year, in March a suicide bombing at an amateur match in Iskandriya, close to Baghdad, killed 41 people and injured over 100. The attack was claimed by Isis, and there were images of the aftermath, in which the ground’s goalposts were smeared with blood.

The Iraqi premier league need to recover from two years of violence. The international team’s players were taken from cities across the country. The country’s international star athletes had to play and train with friends and family members under the oppression of Isis.

A Karbala FC coach, Salim Awda stated that repairing the wounds inflicted on Iraqi football by Isis will remain a challenge. He added that now all these stadiums are not working. Mosul, Saladin, and Ramadi are the most popular clubs. He hopes for them to return and play in the country.

Some players in the national team were Christians. Awda stated that with their help they came to live in Baghdad and participate with the national team. The other players are from Mosul. Unfortunately, many left their clubs because their families were suffering.

In spite of the obstacles, everyone who was involved in Karbala FC as well as the new stadium is optimistic that Iraqi football is in the best position when compared with the other years. Abbas stated that in Saddam’s time they were not allowed to travel by plane. They had to go by bus to Jordan, and from there they had the opportunity to fly. However, now things are much better. They have many local stadiums. He concluded with: “We are free right now. We can travel from country to country.”